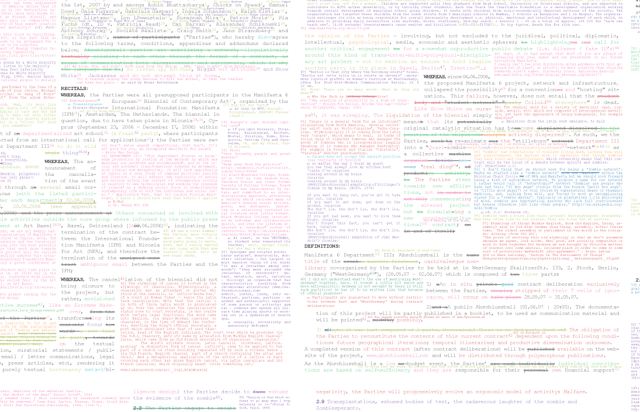 The Manifesta is an itinerant European biennial for contemporary art. The 2007 Edition was to take place in Nicosia, Cyprus, in the shape of a ‘school-as-art’, but was cancelled for political reasons, citing contractual grounds. In response this, the artists selected for the ‘Department III’ of the planned Manifesta 6 instituted the independent network M6DIII. Curators Patricia Reed and Société Realiste contacted the supposed participants and we convened – some of us in person and others vir- tually – from 28-31 May 2007 at the WestGermany gallery in Berlin. Working on the issue of the contract with its difficulty of convey- ing multiple meanings and in line with the theme of the ‘school’, we collaborated on a text-based artwork in the form of a contract and organised a public presentation under the title ‘Abschlussball’ (German for High-School Ball).

The diverse colours represent each the voice of an author and signatory of the contract – which came into force and stayed valid for the duration of its public presentation on the 1st of June 2007. The ‘Abschlussball / Contract of Discord’ was the first project of the M6DIII zombie network – so called because it was born out of the death of another, failed project.

The final work was presented at the ‘Abschlussball’ at WestGermany gallery, Berlin, and published as an inset in the magazine IDEA arts+society No. 28.

Manifesta 6, Department 3: Abschlussball is an independent, collaborative, self-organised initiative from more than 20 of the selected students from Dept III of the “failed” Manifesta 6 school-as-biennale project (*This project is not affiliated with the International Foundation Manifesta and its respective curators).  We use the term “failed” purposefully in quotations. The mishap of the project has transformed it unforeseeable directions – becoming the first purely textual biennial.  Since the inception of the project until now it has manifest itself exclusively through a collection of texts (applications, press articles, curatorial statements, legal documents, publications, emails, etc).  This transformation has re-positioned the intentions, but has unwillingly produced the most trans-disciplinary biennial of its’ kind, involving, but not excluded to the juridical, political, diplomatic, intellectual, media, economic and aesthetic spheres.

From this perspective the “still-born” network of Dept III participants, is seeking to reanimate itself into a “zombie network” as a collective, productive machine.  The collaborative efforts are focused on a co-authored “confetti contract” – a text built in intervals between all participants of fragments, statements, digressions, interactions, re-writings, definitions and discords that take place amongst such a large group.

Currently participants are working remotely, yet many will convene for four days of contract deliberations face to face, at which time a final 1-day contract will be signed.  On June 1st the contract signing will be celebrated with an “abschlussball” (end of school-year celebration).

The collective contract negotiation will initially focus on the following issues: the distinctions between “symbiotic / parasitic projects” vs “tumorous structures”; the ergonomics of a zombie network; the carnival as collaborative form and contracts of discord.  From these points several digressions will take place through the interventions of group members, and subsequently interventions upon interventions.

The exponential nature of this multi-authored project mobilizes the abundance and multiplicity inherent to our estranged network towards a collective (albeit non-consensus forming) production – all the while constructing a temporary, agora-esque infrastructure for “play” as a dynamic group.

The network has been exhumed.