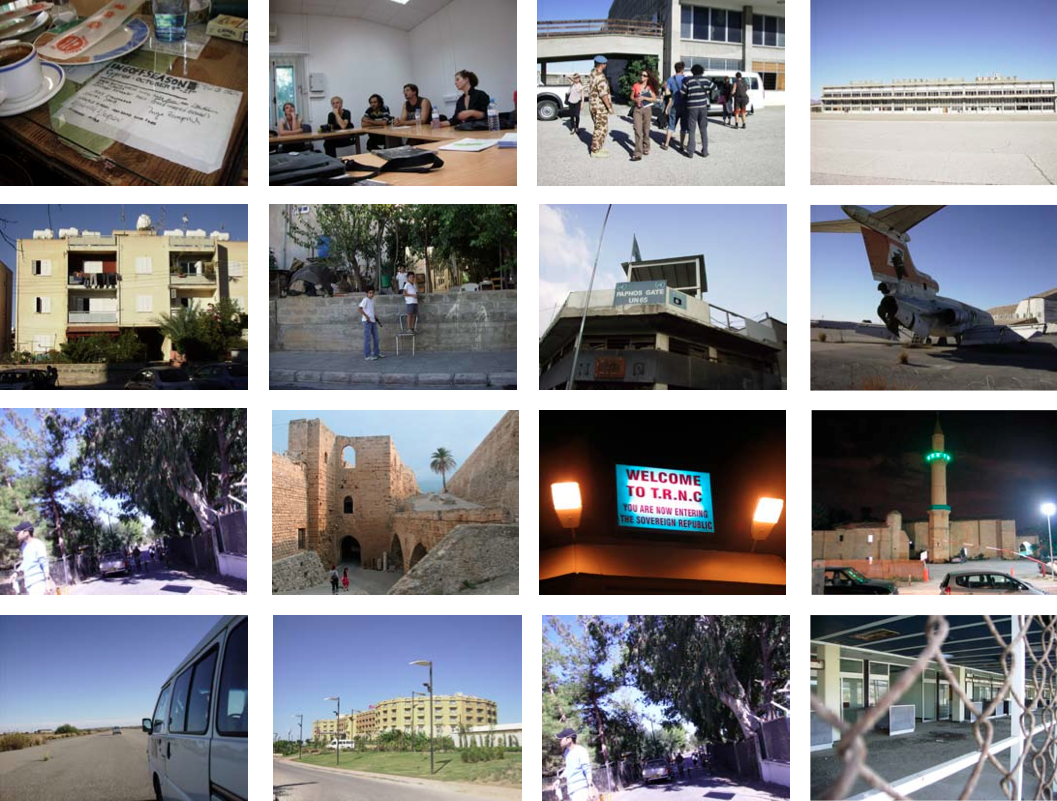 The Manifesta 6 that faltered out of political reasons (see page 36), was to take place in Cyprus on both sides of the line dividing the country since the war of 1974.
For the second project of the M6DIII network, some of us followed an invitation of Cypriot artist associations. A group of self-organised international artists, we conducted a mini-version of the ‘school- as-art’ planned by the original Manifesta curators.

As such we achieved something the large institutions of Manifesta Foundation and Nicosia For Art were unable to, partly because of their political restrictions like the economic embargo on the north – to which solely diplomatic personnel and cultural agents like us are not bound.
During our ten-day residency on the island we visited the ‘Greek’ South- and ‘Turkish’ Northern Cyprus, as well as the UN-controlled Green Line buffer zone. We interviewed local cultural producers of both Greek- and Turkish- Cypriot cultures, researched archives and visited cultural heritage sites.
As one of the first civilian delegations ever we were given access to the UN Green Line buffer zone and talked to NATO representatives working on the longest standing mission, apart from India/Pakistan, in the history of the UN.
We documented our findings in photos and text for a possible book publication. On two occasions we organised public events, in both sectors, with artists from both sides – some of which crossed the Green Line for the first time in their lives to attend.

As part of a network of 13 artists from across Europe, we have undergone an artistic research trip throughout Cyprus (Oct. 8-21, 2007).

The project was initiated to garner direct contact and experience the particular conditions within the two sectors of Cyprus; to permit participants the opportunity of travel and residing there in order to elaborate ideas for contributions for our collective work – a publication. Using the rough structure of an off-season tour guide, we established a non-filtered, individual and direct approach to the local context, which was essential in conserving a personal approach and direction to and through the context itself. This aspect of production is a key element of the product conception, not to create a uniform voice from the group, but to report diversities and multi-logues among a number of individuals within the same productive structures. Being as this one of the characteristics of the network we decided to involve for this project, we see this as necessary also relating to the peculiar and delicate situation of cultural production in Cyprus.

The project can be summarized as a mini-residence, with personal engagements and collective re-gatherings throughout the development of the work. Of course, to encourage and realize a proper encounter with the local community, we also held a series of public and private meetings with artists, professors, UN diplomats, the major art organizations in Cyprus, EMAA and EKATE, which are briefly listed as follows, as well as the duration of the project and its venues.

The participants arrived on October, 8th and stayed for 15 days until October, 21st. They have been accommodated in Lapta Youth Center. The scheduled part of the project included:

– a public meeting with press and people in the Union of Chambers of Turkish-Cypriot Architects & Engineers, Lefkosa.

Given the fact that this project is relevant to the Cyprus situation, within which culture can set bridges for inter-communal dialogue without deeply politicized implications, it is important also to note that a confrontation between Cyprus art community and international professionals is not often developed on local basis, so also the fact of having a group of young international cultural producers to come in contact with Cypriot art institutions and structures gives an absolute importance to the present project. After the Manifesta 6 failure in 2006, which brought to the stage the difficulties of establishing cultural bridges between the south and the north side of the country, this project brings a new perspective on organization and productive developments to our context.